Want to improve the credibility of your C-level speakers? Audio might be the key.

An independent experimental study, "Good Sound, Good Research," published in the journal Science Communication, reveals that it is not only the spokesperson and the content that make a difference in the perceived quality of a speech, even if it is as affectless as a scientific presentation: audio quality plays a much more important role than one might imagine, and its findings apply to the corporate world as well. This realisation is all the more necessary with the ubiquity of remote interactions. Shure's Chad Wiggins, Senior Director of Networked Audio Systems, and William Zadnik, Senior Applications Engineer, explain.

In the current context of mistrust of politicians and experts, the word of an executive is expected, scrutinised and scrutinised in the same way as that of a researcher, if not more. For in addition to being transparent, detailed and factual, it must appeal to the emotions during the current period of instability. More than ever, C-levels are playing for credibility. How much of a difference can CIOs make in maintaining it?

Audio, a key and little-known factor in the leader's foundation and credibility.

Like every quarter, Russell, CEO of a large company, speaks at an All Hands meeting in front of 3,500 employees of different nationalities. The results he is going to communicate are good. His plan is sound, his lieutenants have prepared solid presentations, he is confident. He is wrong. The experience of the employees is not at all the same. Cedric has the microphone much too close to his mouth. You can hear him blowing. The sound of the leaves he is crumpling up is so loud that many participants have to take off their headphones to avoid rupturing their eardrums. And when Cedric turns the floor over to Susan, his financial director, the debacle is obvious. Not only is Susan all alone in a meeting room where the acoustics are too reverberant, but her microphone is much louder: from the very first syllables, several hundred employees stall. Before the health crisis, this kind of talk typically took place in the boardroom of the company's London offices, with an audiovisual production team on site to keep an eye on things. But for the past year, and probably for a long time to come, it has taken place via video conference.

Mobilise your teams working from home, reassure them about the company's prospects, maintain the feeling of belonging despite the distance... This ritual of the plenary conference is extremely powerful. It is in these moments that the leader is observed, tested, judged. It is in these moments that they must be listened to. Needless to say, if this collective mass is not convincing, it can create disappointment, or even disengagement. Especially since employees, in this post-Covid transition phase, are even more focused on their management's announcements. During such a speech, the leader has no right to make a mistake. In a high-stakes situation like this, what happens if the audio quality is not up to par?

According to the "Good Sound, Good Research" study conducted by Dr. Eryn Newman of the Australian National University (ANU), in collaboration with Professor Norbert Schwarz of the University of Southern California (USC), poor audio quality affects not only the perception of the speech but also that of the speaker. Delivering impactful, high-quality content is not enough, even on topics as technical as physics, genetics or engineering.

Certainly, research in cognitive psychology has long demonstrated that the more difficult a statement is to understand, the less likely it is to be judged true and convincing. But the Newman and Schwarz study goes further in its thinking and methodology. It reveals that when individuals listen to recordings of a research scientist presenting his or her work at a conference on YouTube or during a radio interview for NPR's highly respected Science Friday, the quality of the audio strongly influences the perception they may have not only of the content but also of the speaker. In other words, whether the speech is interesting or not, the interest in what is being said remains the same, but the perceived quality differs. Even if the researcher's speech is ultra-precise, technical and argued, the way it is perceived does not depend only on him but also to a large extent on the sound quality. This calls into question the reliability of the speech and consequently reflects on the speaker's image, affecting his perceived credibility.

The other particularity of this study is that it is extrapolable to the corporate world. Not because the audience is the same, but because, firstly, it compares two randomly distributed groups subjected to two different stimuli, with audio quality as the only variable, altered or not. Secondly, because it is based on a specific speaking situation: the "one-to-many" speech that we find in particular in All Hands meetings or webinars. We can draw a parallel with any other field of activity that requires qualified, credible and controlled public speaking. Whether it is in a company, in the educational sector or in a hospital, you must be correctly heard to be understood. 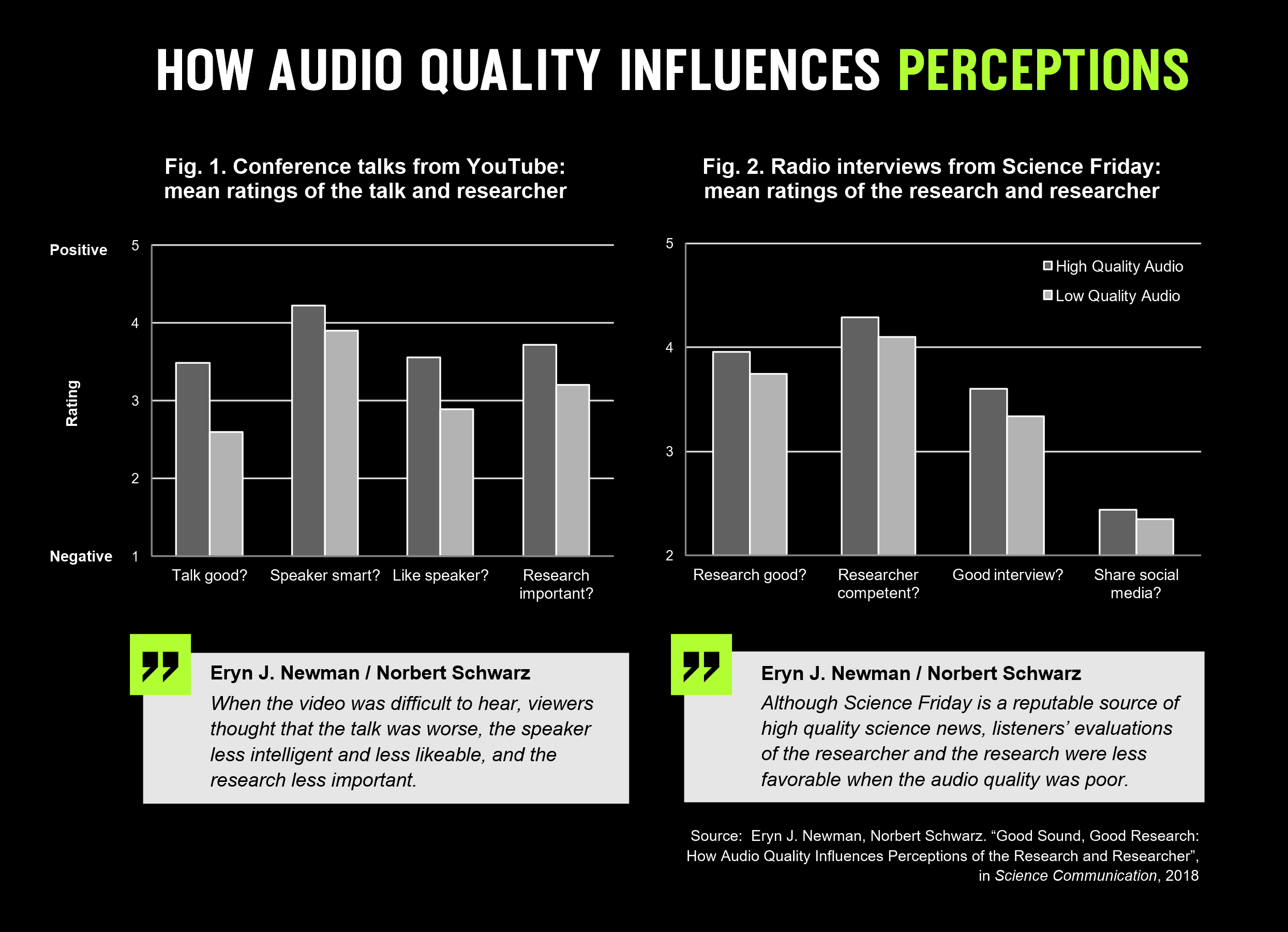 Speech intelligibility: what is really acceptable for a meeting room and what’s not.

This study encourages us, as sound professionals, to explore and question the limits of what is acceptable in a videoconference room. Because in the corporate world, there are times when the spokesperson cannot convince, not because of the quality of his or her words, but because of the equipment and the room itself. What are the variables influencing the perceived credibility of the message and the spokesperson? Is it a consequence of the distortion levels? Is it a consequence of the acoustic characteristics of the room, especially the reverberation? Is it the bandwidth limits of a system? Or the presence of artifacts in the sound signal? In the end, what sound distortions can be tolerated, or not.

According to the STIPA test signal, the recommended index value for an intelligible speech message is 0.60 STI. But is 0.60 sufficient, or should we go beyond 0.76? Some meeting rooms, which are within this acoustic standard, are far from offering ideal conditions in terms of speaking. We accept this because this index remains the most recognised standardised parameter for evaluating the intelligibility of a vocal message. Except that it is primarily intended for use in public address systems in, for example, shopping malls, stadiums or train station halls. For a public announcement, you only need to type one word out of three to understand that there is a fire alarm or that your train is about to leave. You don't need to type the whole sentence to understand what is being said. But if you're attending a virtual conference or webinar, you need to understand the entire sentence, the speaker's actual thought, not just two words. The default STIPA measurement is not necessarily suitable for a huddle room or video conference room. Existing sound quality standards are insufficient for current uses and are not adapted to the corporate world.

And if we agree that in these conditions and considering the stakes that accompany the speech of an executive, using only the microphone of his laptop or his AirPods to participate in a video is simply not enough, we have to admit that not everything relies on the audio equipment, no matter how good it is. Why is that? Simply because beyond sound compression to save bandwidth, the room itself has a significant impact on audio quality and many people tend to forget this. Even if you have the best equipment in the world, in the end, it will always be limited by the acoustics if it is not taken into account. 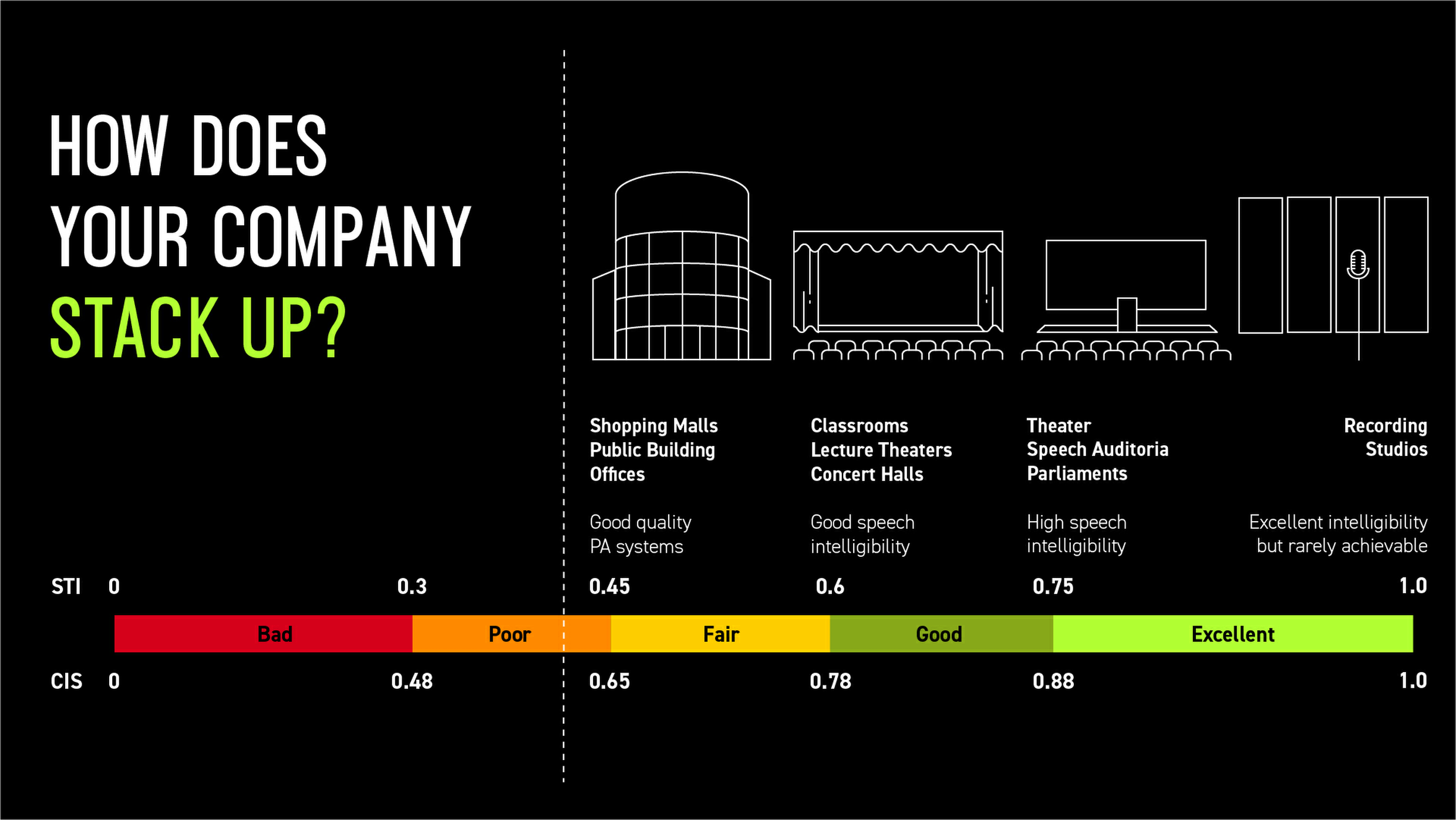 The meeting room plays as important a role in speech intelligibility as the microphones themselves. At Shure, all of our microphones undergo extensive testing and quality control in highly controlled anechoic chamber environments to ensure that they are as close to the sound source as possible. Even the position of the microphone is carefully controlled with a special device that provides a reliable and consistent measurement from all angles. Nothing is left to chance, everything is done to preserve the integrity of the spokesperson's voice, and yet... All the efforts companies make to equip themselves with high-performance technology can be nullified if the room's acoustics are not up to par.

Some rooms, particularly those with a design and aesthetic appeal, can present enormous challenges for integrators, as they naturally amplify existing noise. Tiles, glass walls, exposed bricks, smooth and sleek walls, reflect the echo and do not absorb the sound. Radiators and windows resonate. And any unwanted noise you may have, such as crumpling paper or typing on your keyboard, can further degrade the audio quality of your spokesperson's speech, noise to which remote participants are particularly sensitive. Not to mention the volume of the room in question. That's why it's essential to pay close attention to audio and acoustics when designing the room to avoid costly upgrades.

Of course, technologies can eliminate the sound artifacts that influence the perception that employees may have of their leader. We can still reduce unwanted noise and isolate the voices of the people present, thanks to the DSP integrated in a ceiling microphone, software or dedicated hardware. The directional characteristics of the multi-capsule microphones allow us to specifically cover the areas where the speakers are positioned in order to pick up what they are saying and not the surrounding noise in the room. In large meeting spaces, we can also use local reinforcement to pick up the voice of the person at the back of the room and amplify it so that he or she can be heard at the front of the room when he or she wants to speak and interact with the main speaker. At Shure, we're dedicated to delivering a seamless, successful video conferencing experience with superior audio quality. It's in our company's DNA.

But for IT departments, it is just as imperative to have a holistic approach that takes into account not only the equipment, but also the room, while raising awareness of one of the essential links in the chain: the employees. You must not allow aggressive sounds to interfere with the speaking process, because beyond the comfort of the audience, they have a direct influence on the perception that the participants of a videoconference have of the speaker. The next time your managers organize a group meeting or your sales representatives connect to land a contract, make sure that the audio quality is up to par. Their credibility depends on it, and more than ever, it rests on the shoulders of the IT department and AV/IT professionals.

Interview with Shure Director of Technologies

Rafal Komosa, the company's Director of New Technologies, shares his perspective on what the new world of work looks like for IT.

A key reason why conference calls are so tiring is because it’s very hard work for your brain to listen to and process poor sound. Here are a few things you need to keep in mind to ensure your voice counts and to make the experience better for everyone.