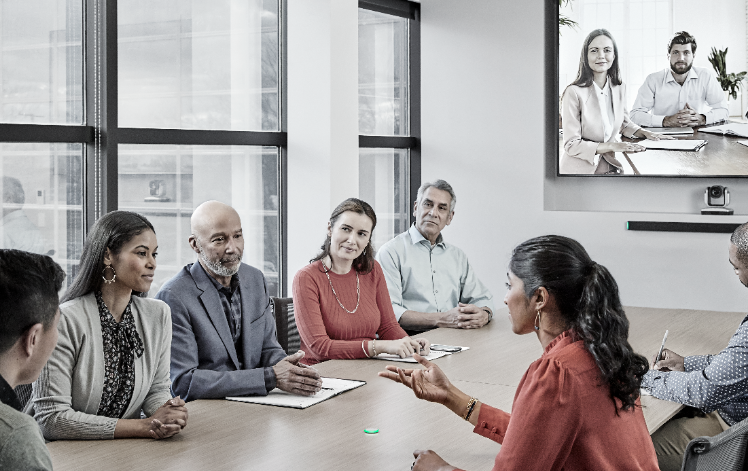 Hybrid working, hailed for its flexibility, is on the rise as more organisations embrace working in dispersed teams, a trend that certainly looks set to continue post lockdown.

As a direct result, many IT departments will have to re-examine their modus operandi to ensure that the long-term effect of remote collaboration does not impact the day-to-day operation of an organisation.

What is certain is that during these months of confinement, many have complained about a lack of fluidity in their videoconferences, blaming poor connections or software without necessarily thinking about the sound configuration.

Offices are going through a change as mixed formats are developed, with new agreements on teleworking, work schedules and other commitments to the business a priority. How are companies preparing for the return of their employees and rethinking their organisation around hybrid work?

Rethinking the configuration of meeting rooms: a puzzle for CIOs

In France, some companies have taken the lead in presenting their new post-confinement work policy: employees will have to spend at least one day a week in the office. When they go to their workplace, it will no longer be for the sole purpose of reading their e-mails or carrying out their assignments, but rather to meet and network. The space ratio will be in favour of meeting rooms at the expense of individual offices. But of all the employees, how do you know how many will remain teleworking and how many will be face-to-face? Will everyone be in the office on the same day, and will those who work from home be able to socialise remotely with their colleagues on site?

The prospect of deconfinement raises a thousand questions. There was no indication of such a situation, and the subject goes beyond the simple question of revising land-use plans. It is not so much a question of investing in meeting room equipment as of questioning the very vocation of the workspace and redefining collaborative modes, so as not to see the spread of frustrating meetings, which, in addition to being unpleasant for users, could lead to distorted decisions by giving the floor to some people more than others.

With the spread of teleworking, companies are moving towards a mixed telework/presence format. This model is problematic because it poses real challenges in terms of voice and collective intelligence.

In telework, you have to mute yourself to avoid parasitic noises, while your colleagues in the meeting room exchange, interact, joke, debate... So many emotions that need to be decoded, so many messages that need to be passed on without being distorted, so many frustrations that create inequalities between those who, on the screen, make a tapestry in the literal sense, and those who are present on site. Telework has changed relations between employees, but the divide should not be allowed to widen with the development of hybrid work. CIOs can no longer ignore audio, as the question is no longer whether their videoconferencing system is compatible with other systems, but whether their meeting room is compatible with systems used by employees, customers and suppliers.

Employees, in general, want to be able to use the systems they have at home to make their videoconferencing calls to the office, hence the success of the Teams, Zoom or BlueJeans platforms, allowing them to connect as easily as if they were at home.

However, the fact that videoconferencing has become more practical by no longer being the exclusive preserve of boardrooms does not mean that it has gained in quality and productivity. And the Huddle Room trend, which has been popular, is no longer suited to the current situation, which has been turned upside down by the current distancing measures.

Pre-pandemic, there has always been a need within companies to conduct face-to-face meetings. It is not for nothing that most of them have allowed their employees to come back on site, two or three days a week, while maintaining teleworking. In this context, the logic of Bring-Your-Own-Meeting (BYOM) is very attractive: everyone can connect with their own PC without having to resort to traditional hardware systems. Gone are the 36,000 cables for audio, video, power, control, piloting, parameter setting, and de facto the technical interventions required due to untimely connection and disconnection problems.

All of these systems work perfectly, except when you have to meet up to 20 people, need a large space because of health restrictions, and can't count on the boardroom occupied by the CEO.

Employees can still videoconference using the camera and microphone of their PC, but in a room with 20 people, with 10 people spread out around the table with the required distances, it's more complicated, because the only people the remote site will be able to hear will be those around the PC, not to mention the acoustic problems that will arise.

Even before the health crisis, an Illuminas study conducted in the United States among 400 IT decision-makers highlighted that four out of five frustrations were related to audio, with background noise (51 %) at the top of the list of concerns of the employees surveyed, ahead of technical difficulties (45 %), sound echoes (43 %), and hearing only part of the conversation (40 %). Among them, senior managers reported spending significantly more time in videoconferencing, with 68 % reporting problems encountered in the meeting room to the IT department at least once a week.

The first confinement survey then revealed disparities between colleagues who were isolated from the surrounding noise because they were equipped with a headset and a videoconferencing microphone, on the one hand, and those who could only rely on their PC's microphone at the cost of reverberation problems, on the other. This situation was all the more penalising since the meetings considered the most crucial for the activity remained those that were held most regularly by video, namely the collaborative work sessions and staff meetings.

The CIOs are already very much in demand with the upcoming reorganisation. They shouldn't be overwhelmed by the explosion in the number of meetings requiring live or remote technical support; the return to the office must be smooth for everyone. So, coming back to the company, yes, but not at the cost of an unreasonable number of interventions and disengagement of employees, because with the multiplication of videoconferences, we can no longer afford to pick up the phone and listen to what a Spanish colleague who speaks English is saying. The most important thing is not to have studio quality, but for everyone to be able to understand each other - intelligibility comes first - and this requires a precise evaluation of the needs of the room, a thorough analysis of the sound system and a mastery of the audio system, which cannot be adjusted by ear. Contrary to the myth perpetuated in the world of audio-visual integration, audio is not an art, but a science.

No intelligibility without DSP

A microphone on its own is not enough to manage sound processing, you need intelligence and electronics behind it. Only DSP (Digital Signal Processing) can reduce unwanted noise and isolate the voices of those present, in order to improve intelligibility and rendering. In the end, whether it is integrated into a ceiling microphone, software or dedicated hardware, the DSP is an integral part of the room's audio system, allowing this connection between the microphone and the codec. This is why today; one cannot certify a microphone for a Teams room without a DSP. Whatever the configuration of the room, the DSP will always save the investment of the DSI who, thanks to it, will be able to manage more and more diversity in the environment.

Employees have requested the need for a videoconferencing system that works as simply as at home, however CIOs still need to prepare for this. With the migration of multimedia services to the IT department, CIOs must succeed in making the two networks - audio-visual and IT - cohabit within the company, taking into account a user experience that is evolving towards greater fluidity. The Holy Grail of audio-visual lies in AV/IT convergence, and the DSP remains the last gateway enabling this connection, for a seamless and successful audio experience.

CIOs contend with the challenge of hybrid work

The need to ensure business continuity through unpredictable cycles of office availability and remote work is challenging IT departments in every industry. Given the constantly changing situation, where do IT Departments stand today?

Interview with Shure Director of Technologies

Rafal Komosa, the company's Director of New Technologies, shares his perspective on what the new world of work looks like for IT.